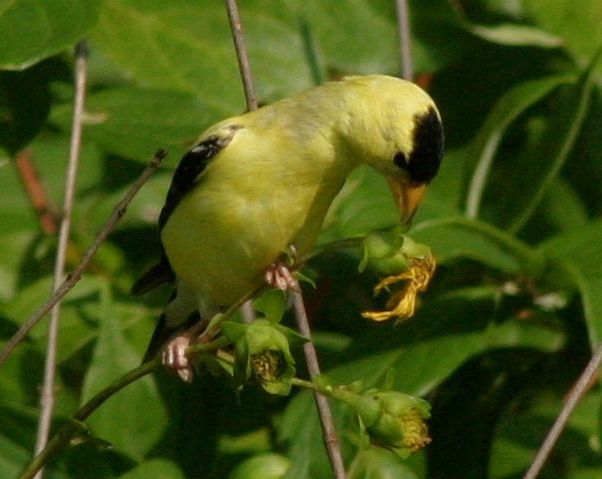 Matt remarked, “My father has a small vegetable garden and for the last couple years around this time of the season, goldfinch, usually in pairs, attack a couple types of leafy greens. The main item is Swiss chard, but they also seem to like beet greens, and to a lesser degree lettuce (romaine or similar with red pigments and not the green varieties like iceberg). He has observed them eating the chard, biting pieces of leaf, but only seen indirect signs of feeding on the lettuce and beet greens (little beak shaped bites around the leaf edge).  So it seems that the birds are definitely eating the plant, and not preying on insects or collecting material.”

Rudy Keller replied, “This behavior is so common that it accounts for one of the Pennsylvania Dutch folk names for goldfinch — the salad bird.”

American goldfinches are vegetarians.  They’re especially fond of seeds but in the spring they’ll also eat buds and strip the bark from terminal shoots.  They’ve been known to eat green algae, maple sap, and as Matt pointed out salad greens.  They rarely eat insects and then only if the insect happens to be in the beakful of food they’re actually seeking.

This food preference protects them from brown-headed cowbirds who lay their eggs in songbird nests.  The cowbird chicks usually dominate the host’s nest and the songbird’s babies die.  But cowbird chicks fail to survive in goldfinch nests.  They starve on the vegetarian diet.

July is nesting time for goldfinches.  While other songbirds have fledglings or even second broods, goldfinches have just begun to nest.  This timing puts their hungry nestlings in synch with maximum seed production in mid to late summer.

This month you’ll see male goldfinches but not many females.  The ladies are busy incubating, waiting on the nest for their mates to come feed them.

Perhaps a male goldfinch will visit your vegetable garden to find a treat for his mate.