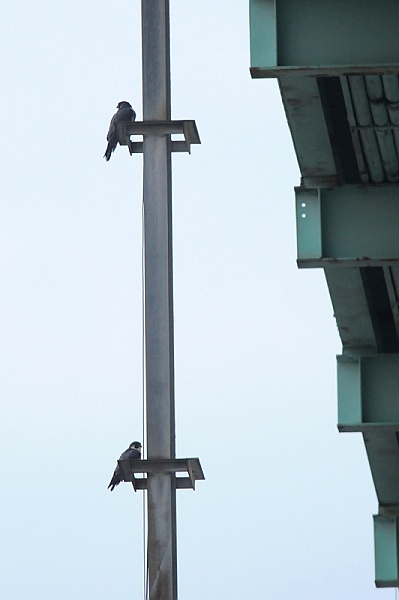 Back in the spring of 2010, a pair of peregrines nested here over the Allegheny River.  The female’s bands indicated she hatched at the Benjamin Harrison Bridge near Hopewell, Virginia in 2008, so we nicknamed her Hope.  The male’s bands identified him as a hometown bird hatched at the Cathedral of Learning in 2008, son of Dorothy and E2.

Unfortunately their nest must have failed.  It was never found and no young were observed.

In early 2011 Hope was still present at the bridge but she had no mate.  In late spring she disappeared too.

After many months without a peregrine sighting, Rob Protz saw one perched on the bridge yesterday afternoon.  He called Steve Gosser who came over with his camera.

After waiting and watching for 20 minutes, Steve checked the navigation beam and found a pair!  Here they are, the female above the male.  We don’t know their identity yet but I’m sure we’ll find out as birders and photographers flock to see and document them.

If all goes well, Tarentum will have peregrine nestlings this year.

Just when you thought winter was dreary, peregrines spice it up.  🙂

9 thoughts on “New Pair At Tarentum”