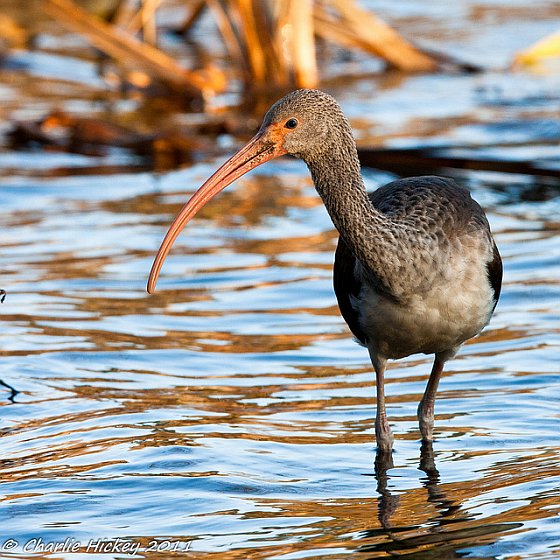 Here’s a bird that surprised everyone.

White ibises usually live along the Gulf and Atlantic coasts from North Carolina through Florida, south to Central and South America.  They also breed in Louisiana and southern Arkansas but in winter they move further south.

Not all of them do.  This immature white ibis showed up at Kaercher Lake in Hamburg, Pennsylvania on November 11 and has spent the early winter there.

Though surprising, this out of range behavior is not unheard of.  Cornell’s Birds of North American Online says that white ibises are highly nomadic.  Their “postbreeding dispersals often take individuals outside normal nonbreeding range” as far north as New York, Vermont and Quebec, as far west as Wyoming, Colorado and North Dakota.

Young birds are more likely to go north and inland.  Banded individuals have been found as much as 1,540 miles from home.  That’s the distance from Altoona, PA to Denver, CO.  These birds really travel!

Interestingly, white ibises don’t nest until they’re three years old so immature birds have a couple of years in which to wander.

Who knows where this ibis came from or where he’ll end up?  For now he’s unusual.  As of Tuesday (Dec 27) he’s still at Kaercher Creek Park.

1 thought on “Unusual Time And Place”