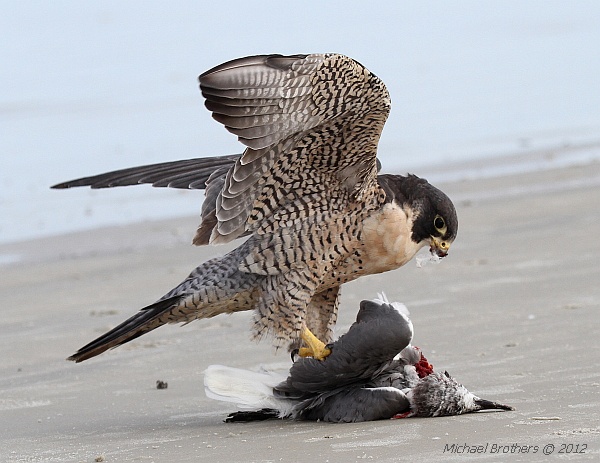 Every afternoon the wintering gulls in Volusia County, Florida stand on the beach at Daytona Beach Shores.  Just before sunset thousands of them stand shoulder to shoulder, facing the wind, unconcerned as people walk by.

The beach is a hotspot for birders because the gulls are so approachable.  It’s easy to see their plumage only 20 feet away though it takes patience to find a rarity among the mass of individuals.

On February 9 during my Florida vacation, Chuck Tague took me to see this spectacle and I met Michael Brothers of the Marine Science Center who monitors and photographs the gulls every day.  We also saw my favorite raptor, a peregrine falcon looking for a meal.

The peregrine is still there.  This week Michael witnessed a rare event which he reported on the BRDBRAIN listserve:

Today, 2/21/12, I stopped by to see the gulls at Daytona Beach Shores and witnessed an amazing sight. I saw a large group of gulls take off from along the beach and assumed that some people had chased the birds off.

When I got closer I found an adult Peregrine had killed a Laughing Gull and it was calmly eating it right on the beach. The bird was amazingly tame and allowed me to sit only 20 feet away and photograph it for 15 minutes or more. It did not seem bothered by beach walkers going by only a few feet away from it.

A few other birders came up and were also able to sit and watch the spectacle. Meanwhile, folks were driving by just behind us, either staring at the bird or oblivious to the rare event right beside them.

Watch the slideshow of Michael Brothers’ beautiful peregrine photos. Click on any image to see the slideshow in its own lightbox.

At the end a passerby pauses to watch the bird.  She obviously doesn’t know that this is …(OMG!!)… a peregrine falcon!

(all photos by Michael Brothers)