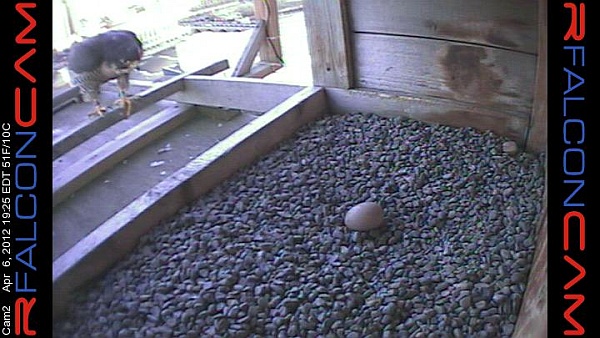 Yesterday the peregrine falcon drama in Rochester, New York went over the top in a twist so incredible that you wouldn’t believe it if you saw it on TV.

The story has a Pittsburgh connection — the two females are the daughter and granddaughter of Dorothy, the matriarch at the Cathedral of Learning — so I’ve been watching from afar.  I’ll try to replay it here.  Hold onto your hats!

You may remember last year’s Peyton Place when Dorothy’s daughter, Beauty, and granddaughter, Unity, both attempted to nest with the same mate, Archer.  He shuttled from Downtown to Kodak Park trying to keep his “wives”  happy but neither nest was successful.  In the months that followed Unity repeatedly challenged Beauty for the main nest site at the Times Square Building.

Archer was out of town on February 10 (he migrates) when Unity beat up Beauty and sent her to rehab.

With Beauty out of the picture and Archer still away on migration, Unity was courted by several males.  She refused their offers and when Archer returned on March 14 he chased them all away.

Unity was on the verge of laying her first egg when Archer lost a battle with another male on March 26.  He returned to the nest to show Unity his condition but he was so badly injured that he couldn’t stand up!  He faded into the background to nurse his wounds.

Three days later, on March 29, Unity laid her first egg.   If things had been calm she would have laid her second egg on March 31, but with an injured mate and unknown male victor she stopped laying eggs until she got to know the new guy.

Meanwhile, Beauty had fully recovered.  On April 2 she was released at Montezuma Wetlands Complex.  Everyone expected her to fly home to Rochester, only 50 miles away.

That was the last day anyone saw Archer.

In the meantime DotCa, a large male from Canada, tried to court and mate with Unity.  The two of them weren’t in synch yet. Their relationship needed more time when…

Unity died yesterday.  She was struggling with a pigeon and landed on the street where she was struck and killed by a car.

Beauty came home last night!  She was gone almost two months, unaware of the drama that occurred in her absence.  She vividly remembered her rival and the territory she lost in February.  She returned, wondering where Archer was and obviously wary that her rival would appear at any moment.

What happens today is anybody’s guess.