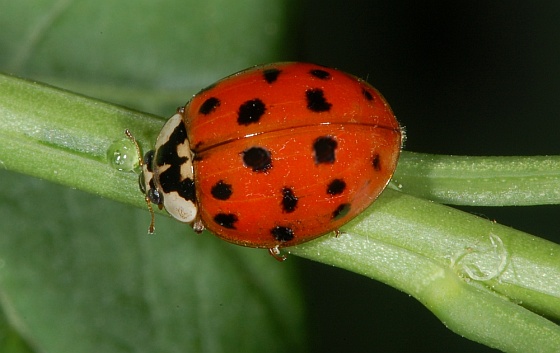 Most of the time we ignore Asian lady beetles until now when they become desperate to enter our houses.

Asian lady beetles (Harmonia axyridis) specialize in eating aphids and scaled insects so they were considered a beneficial insect.  Over and over they were unsuccessfully introduced in the U.S. before they miraculously — and perhaps without our assistance — gained a foothold near New Orleans in 1988.  Successful introductions followed in Europe and the Americas.

One beetle would be cute but this many are a pest when coupled with these distasteful traits:

During last Wednesday’s warm weather I ate my lunch on Heinz Chapel’s steps where I couldn’t help but notice that the pavement and walls were dotted with Asian lady beetles.  The beetles flew around and landed on every surface, including me.

I did nothing to upset them but it didn’t matter.  Some of them bit me, even through my clothing!