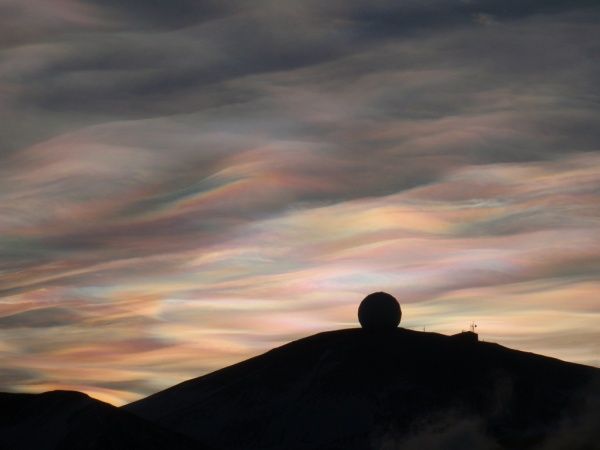 Here are clouds we never see at home.

Nacreous clouds are named for their iridescence.  Like nacre, the mother of pearl substance that lines oyster shells and pearls, they reflect all the colors of the rainbow.

They’re also called polar stratospheric clouds (PSCs) because they form in the lower stratosphere at 49,000 to 82,000 feet in the presence of super low temperatures, -108oF and colder.  These conditions are only found in the polar regions during winter, mostly in Antarctica.

The prettiest nacreous clouds contain only water droplets that glow profusely when the sun lights them from below.  These clouds are benign but others are not.  PSC clouds that form from nitric acid + water cause chemical reactions that deplete stratospheric ozone and make a hole in the ozone layer that protects Earth from the sun’s ultraviolet light.

As we head toward winter in the Northern Hemisphere, it’s summer in Antarctica so it will be many months before there are nacreous clouds again.  These were photographed in August 2009.

(Nacreous clouds in Antarctica over the NASA Radome, photo by Alan Light on Wikimedia Commons. Click on the image to see the original)

2 thoughts on “Mother Of Pearl”