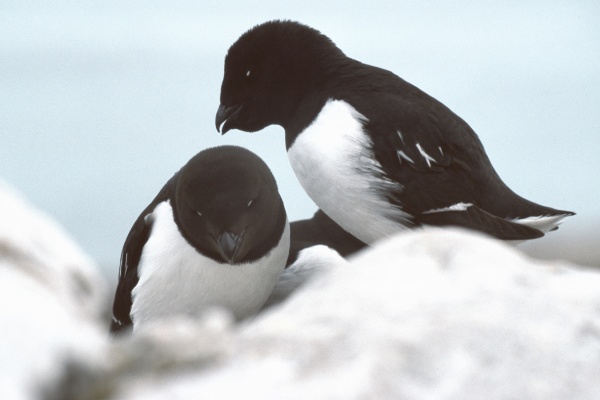 Yesterday I wrote about copepods and polynyas so I could introduce this bird, the dovekie.

Though I visit Maine every September and even take pelagic trips in the Gulf of Maine, I have never seen a dovekie.  That’s because they breed on islands in the High Arctic (Baffin Island, Greenland, Iceland, etc) and don’t leave their breeding grounds until late August.  At that point they’re molting and flightless so they drift on the southbound current to spend the winter in the North Atlantic.  They usually aren’t seen off the coast of Maine until November.

Dovekies (Alle alle), also called little auks, are cute little seabirds about the size of a starling but much fatter — two to three times the weight of a starling.  They are so numerous that there are tens of millions of them in the North Atlantic in winter.

The two shown above are in breeding plumage at Svalbard.  Their eyes are black but look white in this photo because they’re half closed.  Perhaps they’re whispering sweet nothings to each other.

In the U.S. we only see dovekies in winter plumage.  Here’s a video of one off the coast of North Carolina in January that gives you a sense of how tiny these birds are.

In the breeding season dovekies depend on cold water and ice.  Copepods are their favorite food — sometimes their only food — so they locate their breeding colonies near polynyas where copepods are plentiful.   In a curious way they’re an edge species, preferring the fertile edge where ice meets open water.

Dovekies are so numerous that you’d think that nothing could threaten their survival.  Unfortunately they are easy to hunt at their breeding colonies and global climate change may lower their breeding success.

But who knows?  Maybe The Big Melt will help dovekies for a while.

(photo by Michael Haferkamp on Wikimedia Commons. Click on the image to see the original)

6 thoughts on “Birds On Ice: Dovekie”