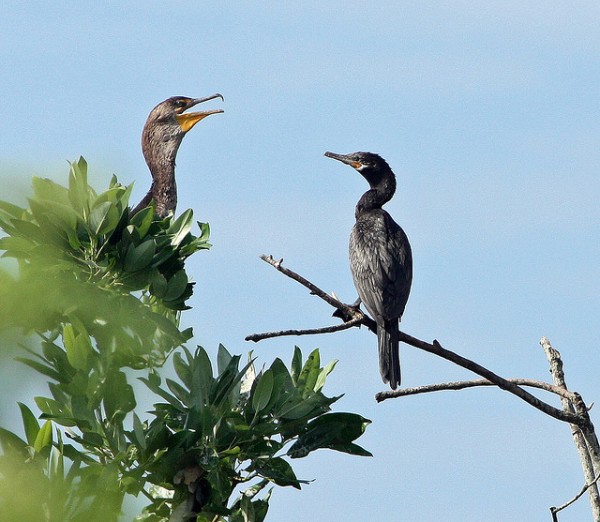 I missed him the first time.

Over the Christmas holiday my family had a mini reunion in Boca Raton, Florida.  Between bouts of happy socializing and overeating I went birding at one of my favorite places, Wakodahatchee Wetlands.

On December 23 I spent five hours there and didn’t even notice a very special bird.  Perhaps that’s because he was trying to fit in and, to my untrained eye, he succeeded.

The next day I read the Florida “Birdbrains” bird reports and found out I’d missed a neotropic cormorant hanging out on the double-crested cormorants’ nesting island.  He’d been there a while, had a predictable perch, and was easy to see.  I just hadn’t noticed him.

What a disappointment!  He would have been a Life Bird (a species I’d never seen before).  I went back to Wakodahatchee at my next opportunity and this time I knew what to look for.

Neotropic cormorants (Phalacrocorax brasilianus) range from South America to Texas and Louisiana but are rare in Florida.  They’re very similar to double-crested cormorants except they’re slightly smaller, sometimes paler, and have a white line where the lower beak meets the chin.  You can see this in Dan Irizarry’s photo above (double-crested on left, neotropic on right) but it’s not particularly noticeable when he’s one bird preening on a crowded island of similar birds.

On my next visit I found him.  He was blending in with the larger birds and able to regain his favorite perch even when a double-crested cormorant used it in his absence.

As a bird out of place, he was trying to fit in.  In my opinion he did a pretty good job of it.

(photo of double-crested and neotropic cormorants at Apopka, Florida by Dan Irizarry)

2 thoughts on “Trying To Fit In”