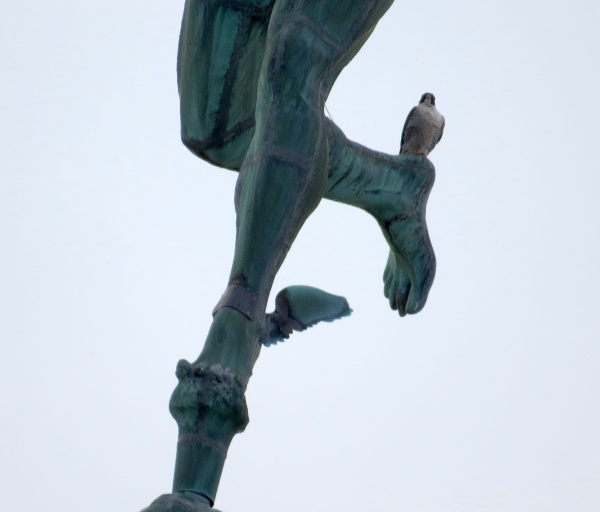 Peregrine fans love to follow the offspring of their favorite nest sites.  One of Pittsburgh’s favorites is Dorothy’s daughter Beauty who lives in Rochester, New York.  I’d say that Beauty “nests” in Rochester but this year is odd.

Last year after a Peyton Place of reversals Beauty mated with DotCa (pictured above on Mercury’s heel) and raised one chick at the Times Square nest.  She was not his only mate, though, as he made frequent visits to Pigott, a young female three miles south at the Brighton site.

DotCa left town on migration last fall and for a brief time this spring Beauty was courted by an unbanded male, but DotCa returned in March and drove that male away.  Then he took up with both ladies as he had last year.

But as a mate DotCa treats Beauty badly.  When he first returned he tried to bump her off her perches and drive her away from the Times Square nest.  He doesn’t present her with food.  Instead he takes food Beauty caught for herself and presents it to Pigott!  This is just not done by serious suitors!

DotCa shows his preferences in other ways.  He spends far more time courting and mating with Pigott than with Beauty, so much so that Beauty doesn’t seem geared up enough to lay eggs.  And DotCa flew with Pigott to the Times Square nest and courted with her there last Thursday!

If he were a mime his meaning is clear.  He prefers Pigott.  Why doesn’t he gang up with Pigott to oust Beauty?  My hunch is that there are two reasons:  DotCa has a precedent for polygamy and Beauty is powerful.

DotCa’s father raised two families when DotCa was born.  As a juvenile he probably flew over to the other side of town where he learned about his father’s other wife.  Birds learn from their parents.  Voilà.

Meanwhile Beauty is powerful enough that she retains the Time Square site despite DotCa’s attempts to oust her.  And she is persuasive enough that he mates with her.

Perhaps we’re fortunate that DotCa has a polygamist family history as this allows him to have two females live peacefully in close proximity.  Meanwhile Beauty and Pigott must work out the dynamics of sharing a mate.

But no eggs yet.