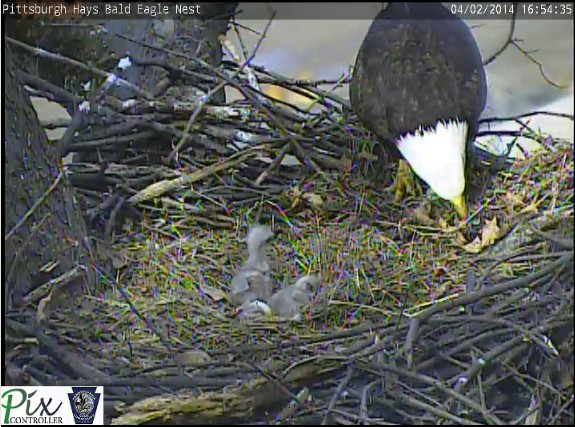 Yesterday afternoon around 5:00pm the third and final egg hatched at the Pittsburgh Hays bald eagle nest.  This happened during rush hour so a lot of us missed it … or did you stay late at work to watch?

Click on the photo above to watch the eaglet emerge from his egg.

An hour later all the eaglets are visible as Mom feeds the oldest chick.

Her actions reminded me that we will soon see a characteristic of bald eagle family life that’s quite different from peregrines’ —  the tendency for the oldest eaglets to thrive and the youngest to die, sometimes killed by their siblings.

Bald eagle eggs hatch asynchronously so each new eaglet is two days smaller than the previous chick.  Bald eagle parents feed the chick that asks for food, and since the oldest is bigger and more active he’s fed more than his siblings.  Eagle chicks are aggressive toward their siblings and the parents don’t breakup the fights.  The third chick often starves.  Cornell’s Birds of North America Online describes it this way, referring to a study in Saskatchewan:

This behavior is quite different from the peregrines’ lifestyle.  Peregrine falcon eggs hatch almost simultaneously so all the chicks are close in age and size.  The last chick may be smaller at first because he hatches two days later, but peregrine chicks are not aggressive and their parents make sure everyone eats at every feeding.   Mother peregrines “chup” to their babies to encourage them to stand up and be fed.  Click here see how effective (and cute) this is.

For now there are three eaglets at the Pittsburgh Hays eaglecam … but be prepared for the day when there might be only two.

(videos and snapshots from the Pittsburgh Hays eaglecam)

30 thoughts on “Three Eaglets … For Now”