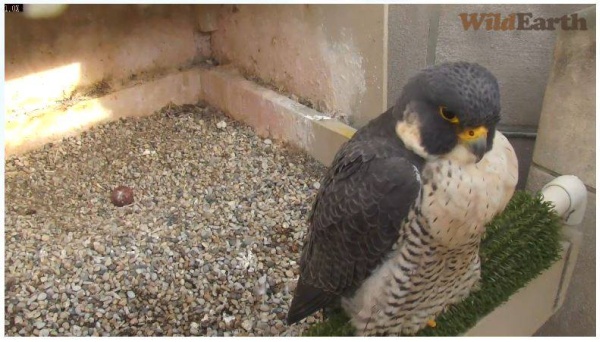 Today’s post is long but with eight nest sites there’s a lot of peregrine news in Pittsburgh.  Some sites are exciting, others are boring (incubation), but that’s par for the course in early April.

Cathedral of Learning, University of Pittsburgh: We have the best falconcam ever at this site but only sad news to watch. At 15 years old, Dorothy laid one egg on March 20 and then stopped. She was egg bound but expelled it on the night of March 29-30. E2 continues to court and bring her food.  Dorothy stands over the egg but never incubates.  For now she waits. See her here. 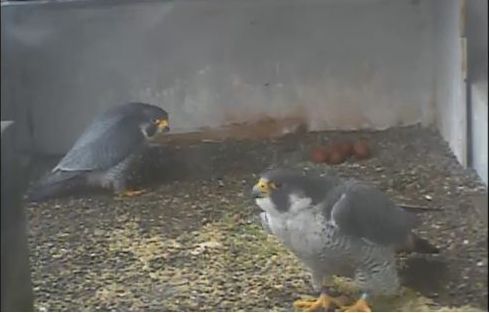 Gulf Tower, Downtown Pittsburgh: This nest exchange snapshot sums up the happy status at Gulf Tower right now.  After two years on a short building on the other side of town, the peregrines came home to Gulf where we can watch them on camera.  We’ve confirmed this pair is Dori (banding name “Mary Cleo,” Akron, 2007) and Louie (Cathedral of Learning, 2002) who last nested here in 2011.  This spring Dori laid 5 eggs March 10 to 19 and began incubation midday March 17 just after her fourth egg, so we expect hatching to begin April 19 to April 21.  We’ll zoom in the camera soon so you can watch for pips.  See them here online.  (*Donate at the link so we can get a better camera! Mark your donation for “Conservation and Field Research Department” and write “Gulf Tower camera” in the comments.) 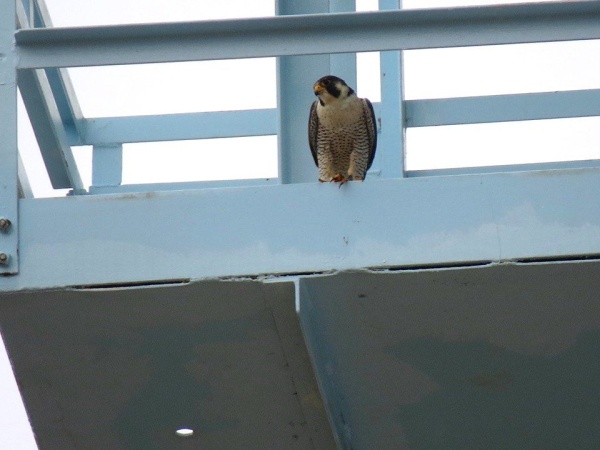 Green Tree water tower:  Green Tree has had a complete changeover in resident adults this year.  Last year Dorothy and E2’s daughter Blue was here with an immature unbanded male. This year Shannon Thompson confirmed the female is unbanded and the male has bands.  On April 1 Leslie Ferree captured this photo of one of the adults hiding his/her legs.  The pair has been very active, eggs are in progress, but so are intruders.  Over the weekend Jill Dunmire noticed the male is missing three primary wing feathers, probably because of a fight.  Photographers, please visit this site.  Let’s identify the male. Click here for directions. 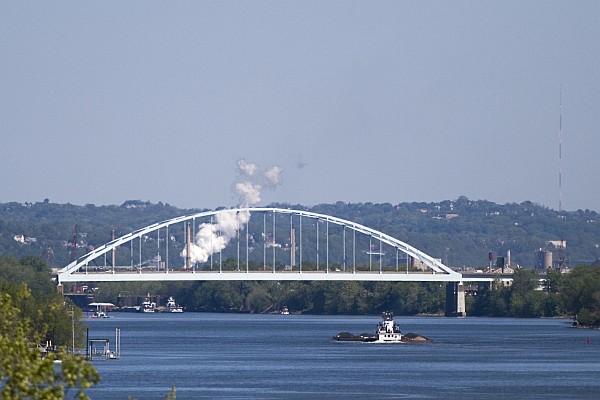 Neville Island I-79 Bridge:  This bridge was over the top with excitement last Sunday.  Anne Marie Bosnyak witnessed an intruder scuffle (right over her head!), a food exchange, and e-chupping from the likely nest location.  The last time she saw the pair mate was on March 31 so they are probably on eggs.  Who knew it could be so exciting? Click here for information on where to watch, though it might be boring now with incubation underway. 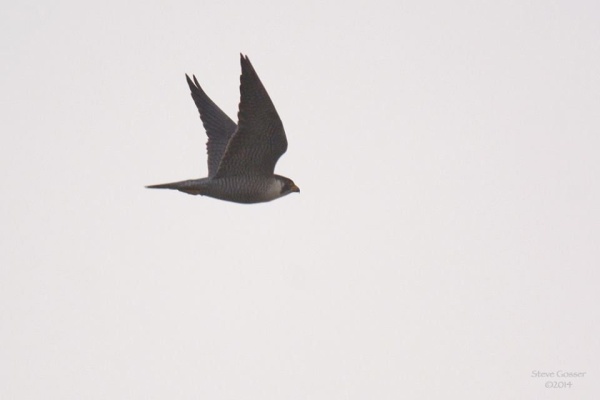 Tarentum Bridge:  Speaking of boring, only one bird has been visible at a time at Tarentum since the third week of March.  Observers usually see the female, Hope (from Hopewell, VA, 2008).  If this pair is on the same schedule as last year the eggs will hatch a few days after Gulf Tower’s, around April 22 to 24.  But this is only speculation.

McKees Rocks Bridge:  There’s no news from this site except:  On March 31 Leslie Ferree photographed a peregrine looking into the holes in the bridge structure.  Was it looking for a pigeon meal or visiting its own nest?  See the tiny red circle above.  (update: Leslie Ferree answers my “Is it the nest?” question in the comments below.)

Monaca/Beaver bridges:  This elusive pair has chosen the big Monaca-to-Beaver railroad bridge as their home. They were seen copulating on February 23 and flying around the bridge on March 29, but other than that there’s no news from here.

Westinghouse Bridge:  No peregrine news at this site but plenty of people news:  A woman went missing under the bridge and a firefighter was killed by a train during the search. Then our keen observer, John English, hurt his foot and hasn’t been able to visit.  Here are his instructions on where to watch.  Please visit if you get a chance.

April’s both exciting and boring.  It’s a good time to get out and watch.