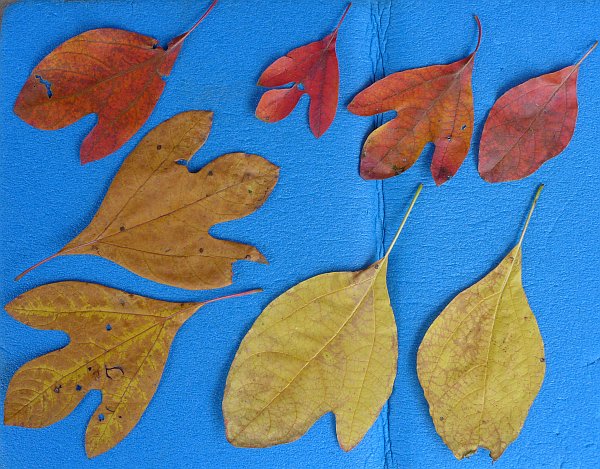 These very different leaves came from the same tree.

Sassafras turns red and yellow in the fall showing off its unlobed leaves, two-lobed “mittens” and three-lobed “paws.”  All three shapes grow on the same tree including both right and left-handed mittens (I checked).

Sassafras (Sassafras albidum) is a medium-sized tree native to eastern North America from southern Maine to Florida to eastern Texas. In Pennsylvania it grows everywhere except on the central high plateau of the Northern Tier.

The tree’s roots, bark, shoots and fruit were used directly in many foods, drinks, perfumes and medicines (think “root beer”) until the essential oil, safrole, was discovered to be carcinogenic and outlawed by the FDA in 1960.  Sassafras by-products can still be used in food and cosmetics as long as they’re certified safrole-free.  Safrole is used in pesticides.

In Europe people plant sassafras as an ornamental for its aromatic scent and unusual leaves.

I found these in the wild in Harrison Hills County Park.