Fire pink (Silene virginica) was blooming in Harrison Hills Park on May 12, above.  When I went back to take its picture someone had picked most of it.  🙁

Jack in the pulpit (Arisaema triphyllum) is blooming in Schenley Park. At first you’ll notice it’s large three-part leaves, then you’ll see the pulpit where Jack lives.  Some of the pulpits have stripes inside, some do not.  Lift the lid to see.

Squawroot (Conopholis americana) isn’t green because it has no chlorophyll. Instead it coexists with oak trees, taking nourishment from their roots. Though it’s parasitic it rarely hurts the trees.  This month squawroot’s “bear corn” flowers are everywhere in Schenley Park. 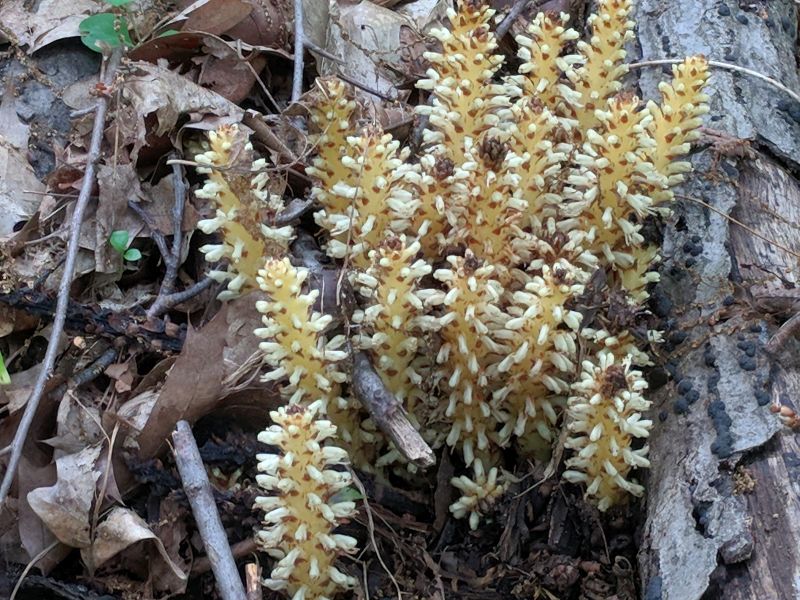 Horse chestnuts (Aesculus hippocastanum), an imported tree, are blooming too. Did you know the flowers are color coded for bees?    After pollination they’ll produce the nuts that we call “buckeyes.”  It’s a confusing name! Click here for the difference between a chestnut, a horse chestnut and our native yellow buckeye.

Get outdoors and see what’s blooming in late May.

1 thought on “Now Blooming in Late May”