Peregrine nesting season is in transition.  Some nests have fledged, others are still in progress.  Here’s an update from last week’s most active peregrine sites in southwestern Pennsylvania.

Cathedral of Learning, University of Pittsburgh

Peter Bell’s video above (Pitt Peregrines Facebook page) shows how close the birds were. As he says, “The challenge of photographing peregrines … they’re comfortable up high and far away. This is Hope on Heinz Chapel – what is considered extremely low, about 250 feet up.”

Peter snapped the top photo around 3:30p on Saturday (June 2) as Hope flew away from two aggressive juveniles on the Heinz Chapel roof.  She was carrying prey but she wouldn’t let them have it because it was part of her lesson plan.  Ignoring the lesson, they rushed her.

I joined Peter at 4p and we walked — sometimes ran — to follow the action in the air. Overhead two really loud juveniles whined for food, flew at breakneck speed, and chased their mother.  On the ground, wedding after wedding emerged from Heinz Chapel and posed for photos by the lawn.

Eventually the two dramas nearly collided. Dangling prey, Hope flew from Heinz Chapel toward the Cathedral of Learning urging a juvenile to flip upside down to receive it.  He flipped, she dropped it, and … he missed!  Good thing it hit the lawn and instead of the bridesmaids!

The two youngsters fledged May 29 and 31, spent the first few days landing on the Cathedral of Learning, then graduated to Heinz Chapel and Alumni Hall.  By yesterday afternoon, June 4, the entire family was hard to find.  They’re further away from home as the parents teach the young how to hunt.

John English and I visited the Westinghouse Bridge around noon on Sunday June 3 and found the juveniles ledge walking and shouting at their mother, “Feed me!”  We eventually saw the entire family — both adults flying and three juveniles on the arch.

In the photo below, a juvenile has his head turned away to look at his mother. You can see the “eye spots” on the back of his head that are meant to fool predators.

John and I then drove up the Monongahela River to look for peregrines at the Elizabeth Bridge.  From our vantage point at the waterfront we saw two adults and heard a youngster begging from the nest area but we didn’t see any juveniles.  What we didn’t know is that a juvenile had flown recently because …

Around 2pm a young peregrine was seen on the road in the center of the bridge’s northbound lane but traffic in the construction zone was too intense to stop (reported here by Walter Marchewka).  Fortunately Philip Tyler was able to retrieve the bird and take him to rehab. The youngster hit his head quite hard and is being treated for head trauma. (Click here for Philip Tyler’s report on Facebook.)

Amber Van Strien has good news from the Tarentum Bridge last weekend.  Using her zoom camera from the nearby upstream park she photographed two chicks moving around in the nest box. 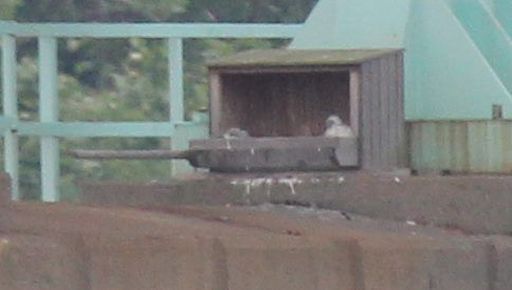 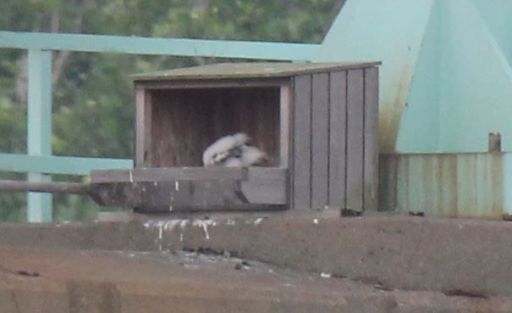