This red-tailed hawk is not consuming the lump near his mouth. He’s casting a pellet of indigestible bones, fur and feathers that came up from his gizzard. Pellets are a normal by-product of digestion in birds of prey. If you find one, it can tell you what the bird was eating.

We always find pellets during annual maintenance at the Pitt peregrine nestbox including these three found during our 9 January visit (paperclip for scale). The pellets can be many months old.

A closeup shows feathers and bones (no fur*) but is not very enlightening due to the pellet’s age. Fortunately I stored the pellets in a ziploc bag. After they thawed a small fly appeared inside the bag, hatched from eggs laid on the pellet in much warmer weather. Ewww!

I imagine the pellets came from Morela since the green perch is one of her favorite places to rest and digest.

Peregrine pellets are slightly longer than a paperclip. Some birds make much larger pellets.

On a hike at Audubon Greenway Conservation Area last Wednesday we found a surprisingly large pellet containing fur, bones and a big tooth. It was so large that we wondered if a bird could produce it. I didn’t pick it up but it looked as though it could span my palm.

A Google search revealed that great horned owl pellets are 3 to 4 inches long, usually cylindrical and tightly compacted. This one may have opened up because it was soaked by heavy rain.

So what did the owl eat? Whose big tooth was that?

Learn more about owl pellets at The Owl Pages: Digestion in Owls.

* p.s. There is no fur in peregrine pellets because they don’t eat mammals, only birds.

Peregrine news at the Cathedral of Learning is pretty quiet lately.

Morela did not stop by the nest yesterday but Ecco visited a couple of times including a surprise approach to the snapshot camera.

His favorite way to leave was by jumping to the roof. 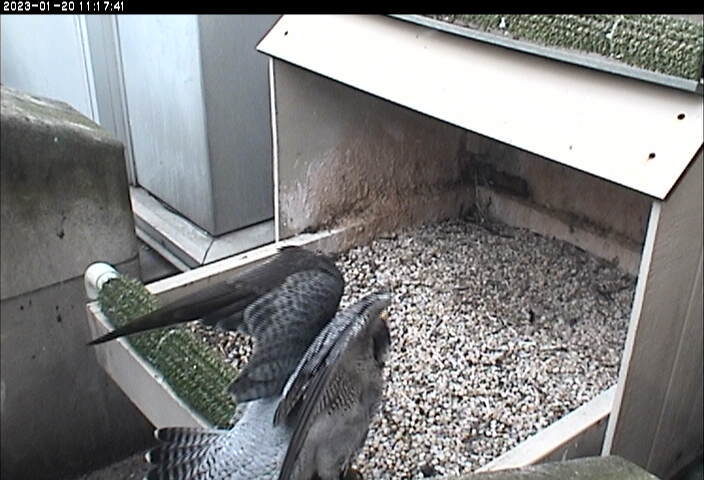 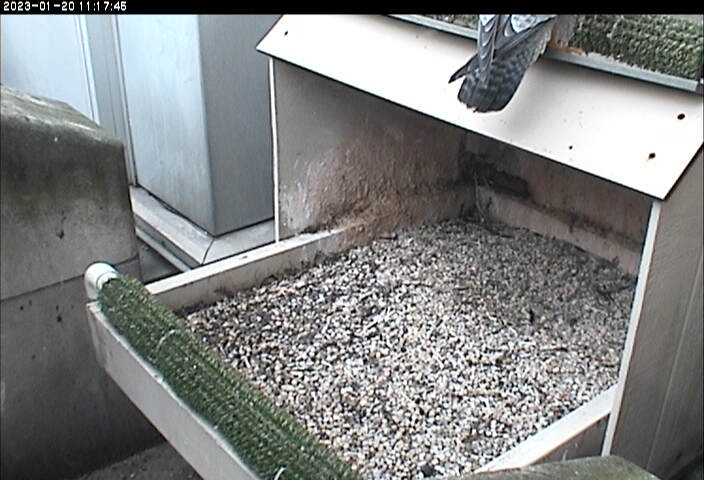 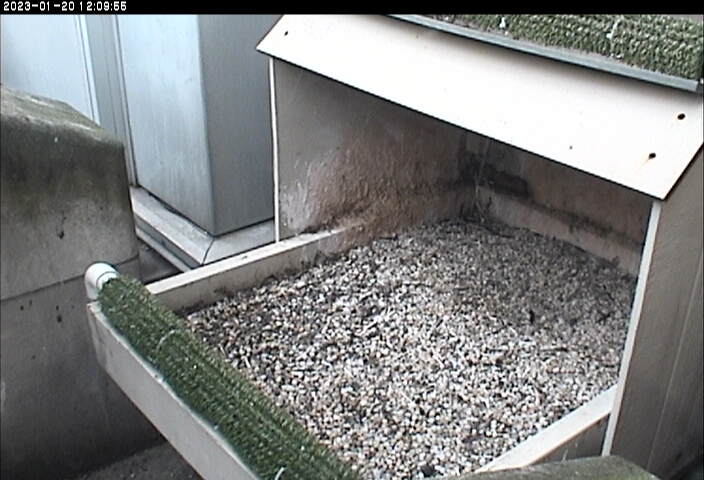 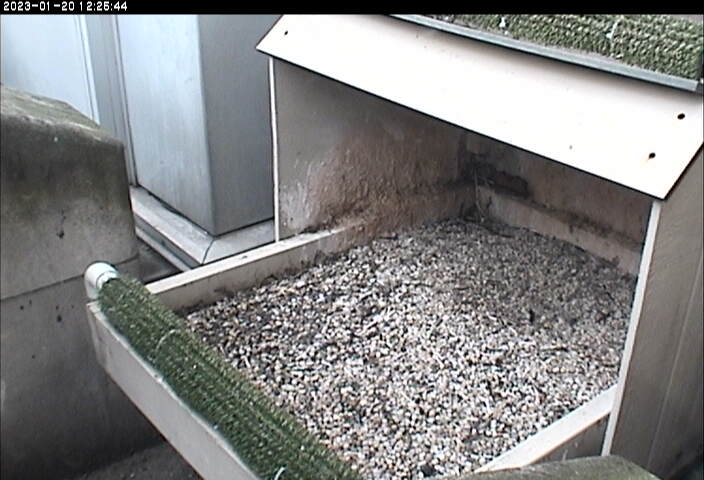 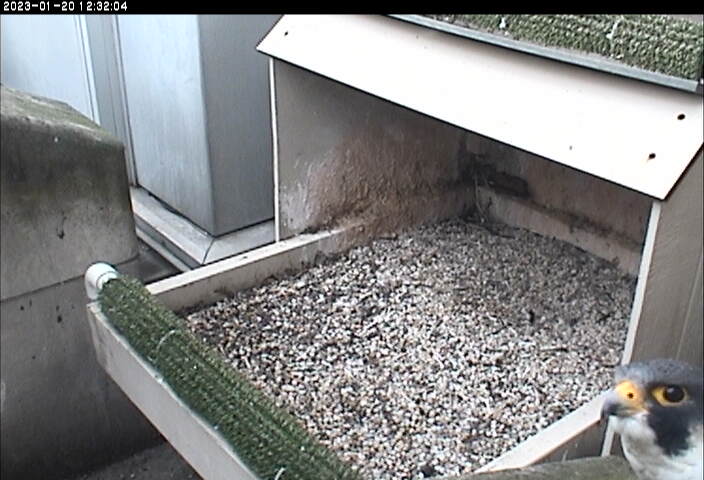 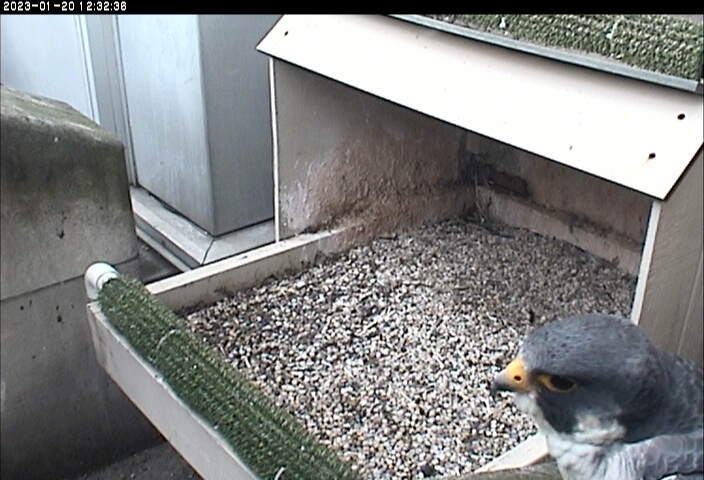 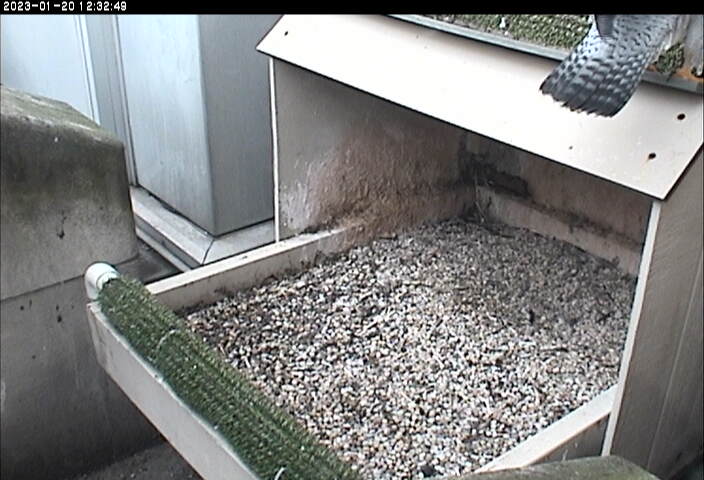 (photos from the National Aviary snapshot camera at Univ of Pittsburgh)

Squirrels can be annoying at bird feeders but their expressions can be endearing.

If you think our eastern gray squirrels (Sciurus carolinensis) are cute you ought to see the native red squirrel of Europe (Sciurus vulgaris).

Sat at my desk trying to concentrate but… pic.twitter.com/QhUHkoBZPW

These native squirrels have been declining in the UK, Ireland, and Italy due to competition from eastern gray squirrels, imported from North America in the 1890s and spread by humans to new locations(*).

However, the native red squirrels are stabilizing in Scotland, in part because European pine martens (Martes martes) are increasing and they selectively prey on gray squirrels.

The European pine marten is pretty cute, too.

p.s. Gray (grey) squirrels are invasive in the UK but a 2016 study found that their populations are genetically distinct from their neighbors and they didn’t invade new places on their own. Humans spread them!

One of the worst offenders at spreading grey squirrels was the 11th Duke of Bedford, Herbrand Russell. Russell was involved in many successful animal conservation projects, but released and gifted many grey squirrels around the UK from his home at Woburn Park.

— Imperial College London: Don’t blame grey squirrels: their British invasion had much more to do with us

Fermented fruit tastes so good that wild animals large and small overindulge until they can barely walk.

Some, like this red squirrel, are puzzled by the odd feeling that overcomes them.

Groundhogs just keep going despite that wobbly feeling, not realizing that it’s hazardous to stand up. This particular groundhog got grouchy. He’s not a happy drunk.

And then there’s the story of a drunken moose who got stuck in a tree.

— Aldo Leopold, A Sand County Almanac: “Thinking Like A Mountain”

Aldo Leopold (1887-1948), quoted above, was a writer, philosopher, forester and conservationist. In the early 1900s he participated in a project to eradicate wolves from the American West. Back then it was thought that the absence of wolves would be great for our range cattle but no one considered what would happen to the landscape without the apex predator. Thirty years later Leopold wrote about it in A Sand County Almanac. We see the same results in Pennsylvania and in Pittsburgh’s parks today.

It’s not the rocks that are afraid of deer. It’s the forest that fears for its life because deer are its predators.

When the deer population is in balance with the habitat, the forest is fine. When the population is too high the forest shows signs of distress on its way toward failure including browse lines and small bonsai-like trees, as seen in Schenley Park below.

In Riverview Park deer overpopulation has encouraged the proliferation of invasive Asian jumping worms and led to a host of other problems including erosion, described by Mark Kramer in How One Park’s Ecosystem — and Maybe its Legacy — Is Eroding Away.

Amazingly, it all started with the decision to remove an apex predator. We humans are the reason why there are too many deer and, so far, we haven’t had the will to reduce their population to a sustainable level.

In the meantime the forest is afraid for its life.

(photos by Kate St. John and from Wikimedia Commons)

… and then using the wind speed chart from the National Weather Service (NWS) to make a guess. My guess for the above photos is a Gentle Breeze 8-12 mph or a Moderate Breeze 13-18 mph but it’s hard to tell.

NOAA weather satellites don’t see the wind either but they can see the clouds moving in three layers.

In their animations of satellite images we can almost see the wind but not its speed.

For instance, in this GOES East animation from last Thursday 12 January 2023 we can see the Atmospheric River pumping into California and a low pressure system moving up the Ohio Valley.

NOAA’s computers use the animated maps to calculate wind speed and direction. The result, called Derived Motion Winds, plots the wind height, direction and speed on a map.

Here’s the same timelapse with Derived Motion Winds. Notice that the layers often don’t move in the same direction or at the same speed. You’ve felt this in an airplane as a “bump” when the plane rises or descends between conflicting layers.

You can “see” the wind anywhere in the Americas by choosing a satellite to view (list on the left) at the NOAA GOES Imagery Satellite Maps. Click on Derived Motion Winds if available.

To view the current GOES East satellite, pictured above, visit these links:

(photos from Marcy Cunkelman and Wikimedia, maps and animations from NOAA and the National Weather Service)

Pittsburgh’s skies were oppressively gray on Saturday with thick Lake Effect Clouds but the forecast promised the clouds would break in early afternoon so I planned a walk in Schenley Park for 2:30pm. Hah!

By 3pm the clouds were still thick and gray and the revised forecast predicted they would break up in the 4 o’clock hour. Of course! We were about to get 15-30 minutes of full sun immediately followed by sunset at 5:15pm, a classic Gleam At Sunset. I timed my walk to arrive at Schenley’s golf course by 4:45pm.

My photos show what happened: the classic gleam, an unexpected sun pillar, and a beautiful red sky at sunset.

If you’ve never heard of Lake Effect Clouds and the Gleam At Sunset, find out more in last month’s article:

Pitt peregrines Morela and Ecco stay at the Cathedral of Learning year round but have not been active at their nest in this month’s gloomy weather. Next month real courtship will begin and so will the National Aviary’s Live Falconcam. It’s hard to believe the first egg of the year is only two months away.

To get in the mood for the 2023 nesting season here’s a slideshow of last year’s successful nest, a recap of highlights, and the Top 4 videos from the National Aviary falconcams.

The sunrise was gorgeous and cold last Wednesday when a group of us decided to walk at Jennings in Butler County. We saw few birds but there were ice heaves, buttress roots on an elm, and the seeds of old man’s beard (Clematis drummondii).

When old man’s beard is in bloom it’s called virgin’s bower, transforming it from a young woman to an old man in a matter of months.

My friends who live north of the city have not seen many dark-eyed juncos at their feeders this winter, but juncos are definitely present at the Frick Park Environmental Education Center. Charity Kheshgi posted photos of our recent trip to Frick.

(bird photos by Charity Kheshgi embedded from Instagram, all other photos by Kate St. John)

This winter Frick Park has a returning resident though he or she may not be the same individual that used to live there.

In late December Malcolm Kurtz photographed and video’d a busy beaver in Nine Mile Run which he posted to his Instagram account @woodlandpaths. (page to the right below to see video)

Malcolm’s story was picked up by the Pittsburgh Park Rangers @pghparkrangers who named the beaver Castor — part of his scientific name Castor canadensis.

The Park Rangers’ story was picked up by CBS News at Park rangers watching over Castor, the new resident beaver at Frick Park. This beaver is a celebrity.

If you visit Frick Park’s Nine Mile Run valley, keep an eye out for Castor. Beavers are nocturnal but Castor is apparently a daytime camera hound.

(photo by Malcolm Kurtz @woodlandpaths via Instagram; posts are embedded)