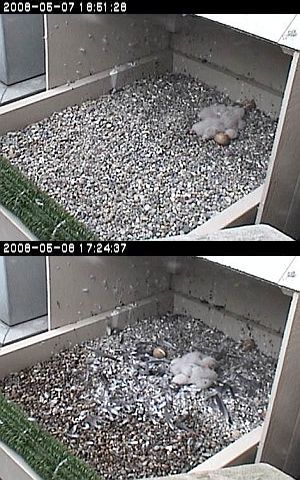 I’ve watched the peregrines at University of Pittsburgh for many years and have learned something about Dorothy the female who nests there: she is not the best of housekeepers. When she has chicks to feed, cleaning her nest is a low priority.

This trait is individual to Dorothy’s “personality.” If you observe other peregrine nests on webcams, you’ll see that the gravel is usually pretty tidy.

Until yesterday I had hopes Dorothy had changed her ways. Perhaps E2 was having a positive influence. As recently as Wednesday evening the gravel was clean (see photo, top right).

Not so on Thursday! It rained all day and Dorothy gave up. In the second photo the nest is carpeted in prey feathers and the chicks are surrounded by a mess. As my friend Kate says, “Well, that’s what happens when you have young kids.”

Beth Fife of the Pennsylvania Game Commission will have her work cut out for her when she comes to band the chicks this spring. Every year Beth not only has to collect the chicks while Dorothy attacks, but she must drag a garbage bag out on the ledge and clean Dorothy’s nest.

For now, it looks like another messy year. Perhaps Dorothy thinks that Beth provides room service. (NOT!)