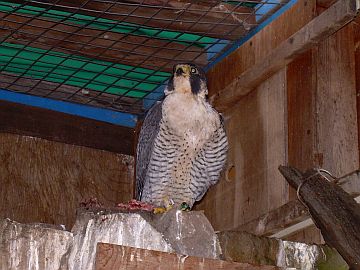 Back on August 5 I reported on a male peregrine born at the Gulf Tower in 2006 who was injured in a fight at the Burlington Lift Bridge in Canada.

Nicknamed “Pittsburgh Pete,” he nested successfully at the Lift Bridge and raised four young but in late June a rival showed up and nearly killed him.

Pete survived his injuries and seemed to be doing well but his rival did not leave the scene.  Observers noticed that Pete’s mate seemed to tolerate the rival.  What next?

On November 9 Pete was found unable to fly.  Judy Bailey, an Animal Control Officer for the City of Hamilton, Ontario, came to his rescue and took him to the vet where he was examined and x-rayed.  None of his bones were broken.  Perhaps he had soft tissue damage or a mild head trauma.  In human terms that could be a sprain or a ligament injury or a bop on the head.

After his vet visit Pete settled in at Judy’s aviary where she’s feeding him gutted quail and giving him every opportunity to recuperate.  Since he can’t fly more than a foot or two off the ground, Judy constructed climbing branches so that he can walk his way up to a high perch as shown in Judy’s photo.

Pete visited the vet again last Monday and had more x-rays.  He still shows no signs of bone damage but he droops his left wing.  His injury is between his “elbow” and “shoulder” but the extent of the damage is unknown.

Considering his troubles, Pete is doing well and gaining weight.  But by now he’s certainly lost his territory at the Lift Bridge and it would be dangerous for him to go back there.

His future will be complicated whether he recovers or not.   I’ll keep you posted as I hear more from Judy.

9 thoughts on “Pittsburgh Pete’s in rehab”