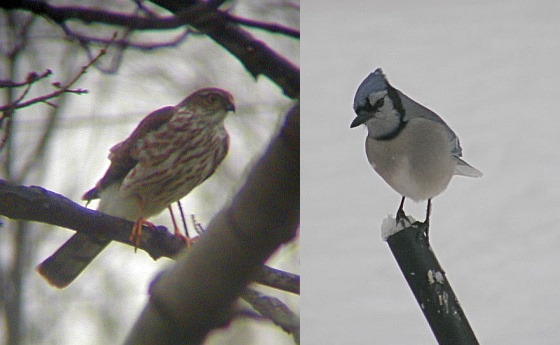 Yesterday at the lake at Moraine State Park I saw some blue jays across the cove.  I didn’t pay much attention until I heard an unusual noise coming from their direction.  Was there a green heron over there?

I checked with my binoculars.  No green heron.  Just three blue jays and an immature sharp-shinned hawk.

The jays were having fun.  The hawk was not.

The blue jays loafed in the trees and waited for the hawk to attack.  The sharpie swooped but the jays always evaded him.  One jay in particular taunted the hawk by flying close and allowing the hawk to chase him.  This must have given the jay an adrenaline rush because the sharpie was faster and sometimes nearly tagged the jay.  At those exciting moments the jay made a green heron noise.

This game went on for 20 minutes.  The hawk could not win.  He was exactly the same size as the blue jays and his speed and anger were no match for their cunning brains.  The sharpie burned a lot of energy but he was not going to quit.

It ended when the “green heron” jay got bored and flew away.

At last the sharp-shinned hawk could focus on finding a meal of an appropriate size.