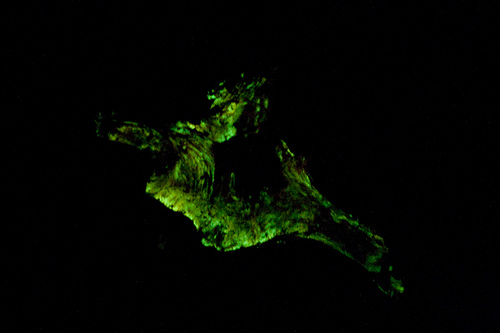 October is a good time of year to see wood glow in the dark.

The phenomenon is called foxfire and is most often caused by the honey mushroom (Armillaria mellea), native to eastern North America.

Armillaria mellea feeds primarily on hardwood and is most often noticed when it produces fruit –> honey mushrooms.  The mushrooms are like the apples on a tree.  There’s a big plant structure that produces the fruit, but in the case of Armillaria you can’t see the “plant” until it glows.

The glowing comes from its rhizomorphs that look like long, black bootlaces and grow under the bark of dead trees, downed logs, old roots and stumps.  They also grow on living trees which they eventually kill.

The faster they grow, the more they glow because their feeding process produces light.  Their bioluminescence is a chemical reaction that’s the opposite of photosynthesis.  The tree they’re consuming used CO2 + light to produce organic (carbon-based) material + oxygen.  The fungi use luciferin molecules to combine organic material + oxygen to produce CO2 + light.  Pretty ingenious, eh?

Finding foxfire is problematic, especially for city folks like me.  The light produced is a faint green or blue glow that’s easily swamped by man-made light.

The habitat and weather must cooperate too.  The infected wood has to be damp — not too wet, never dry — and the best temperature is 77oF though anything above freezing is acceptable.  Summer heat (86oF+) shuts down bioluminescence which makes autumn, with its early sunsets and cooler temperatures, an optimal time to see it.

I’ve never seen foxfire but that’s no surprise.  I’d have to drive to a very dark place (how far?) and wander in the woods at night looking for a faint glow, hoping I don’t encounter a mammal I don’t want to meet.  Spooky!

Have you seen foxfire?  Where?

(photo of foxfire in Allegany State Park, New York by highlatitude on Flikr, Creative Commons license.  Click on the photo to see the original)